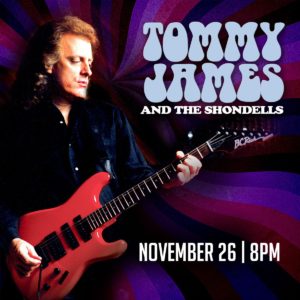 Born in Dayton, Ohio, James and his family moved to Niles, Michigan. He was a child model at the age of four.[1][2] In 1959, at the age of twelve, he formed the band "The Echoes", which eventually became "Tom and the Tornadoes".[2] In 1964 the band changed its name to The Shondells. That same year, Jack Douglas, a local DJ at WNIL radio station in Niles, formed his own record label, Snap Records. The Shondells were one of the local bands he recorded at WNIL studios.[3] One of the songs was the Jeff Barry and Ellie Greenwich ditty "Hanky Panky", which the pair had recorded under the name The Raindrops.[3] The song was a hit locally, but the label had no resources for national promotion, and it was soon forgotten.[2][3] In 1965, a local dance promoter, Bob Mack, found a copy of "Hanky Panky" in a used record bin and started playing it at his Pittsburgh dance clubs.[1][2] Soon after, a Pittsburgh area bootlegger made a copy of the song and began pressing copies of it, speeding it up slightly in the process.[3] Sales of the bootleg were estimated at 80,000 in ten days.[1][4] It became number one on Pittsburgh radio stations in early 1966.[4] Douglas heard about the record's sudden popularity in Pittsburgh because his name and location always appeared on Snap Records labels.[3] Numerous calls from Pittsburgh convinced James to go to Pennsylvania, where he met Mack and Chuck Rubin, who handled the talent bookings for Mack's dance clubs. Before long, all three major music trade papers, Billboard, Cashbox and Record World, were listing "Hanky Panky" as a regional breakout hit. Rubin, who had music industry connections, said it was a good time for the trio to travel to New York City in search of a record deal.[3]

The men made the rounds of the major recording labels, getting initial potential offers from most companies they visited. One label, Roulette Records, gave no initial response because its head, Morris Levy, was out of town until evening; Roulette was one of the last stops on their visit.[3] By the next morning, Mack, Rubin, and James were now receiving polite refusals from the major record companies after the enthusiasm for the record the day before. James said, "We didn't know what in the world was going on, and finally Jerry Wexler over at Atlantic leveled with us and said, 'Look, Morris Levy and Roulette called up all the other record companies and said, "This is my freakin' record." (laughs) and scared 'em all away – even the big corporate labels.'" Their only option would be to sign with Roulette.[4]

Since the band had broken up two years before, James was the only Shondell left.[3] Mack made his dance club bands available to James, but nothing seemed to fit until one of the bands' guitarists took James to the Thunderbird Lounge in Greensburg, Pennsylvania. James sang with the house band, the Raconteurs. The Raconteurs became the new Shondells,[3] and Jackson acquired the professional name of Tommy James. By the third week of June 1966, "Hanky Panky" had become the top single at WLS.[5] By the third week of July 1966, "Hanky Panky" had become the top single in the United States.[3]

Tommy James and the Shondells

After a few comings and goings of members, the classic lineup of James, Eddie Gray (guitar), Mike Vale (bass), Ron Rosman (keyboards) and Pete Lucia (drums) was formed. The group recorded a follow-up song to "Hanky Panky". When Bob Mack's attempt at finding some Shondells worked out in an inadvertent way, he told James about another record he found in the same used record bin "Hanky Panky" came from: "Say I Am" by Jimmy Gilmer and the Fireballs. The only thing James and his new Shondells were aware of when they entered the recording studio for the first time is that whatever they recorded should sound similar to "Hanky Panky", although the two songs sound nothing alike. Mack played The Fireballs record for the group, and they decided to record their version of the song. Mack was credited as the producer for the group's first album, Hanky Panky.[3][6]

Songwriter Richie Cordell wrote (or co-wrote) and produced many of the group's hits, among them "I Think We're Alone Now", "Mirage", and "Mony Mony".[7] The creation of "Mony Mony" was a group effort involving Cordell, James, Shondells band member Peter Lucia, producer Bo Gentry, and Bobby Bloom. James and Cordell set out to create a party rock single, working out everything except the song's title, which eluded them even after much effort. When they took a break from their creative endeavors on James' apartment terrace, they looked up at the Mutual of New York Insurance Company's large neon sign bearing the abbreviation for the company: M-O-N-Y, which provided the song's name.[3]

Tommy James and the Shondells also produced a "Mony Mony" video when the song was a hit. Even though a number of musical groups had already produced videos by that time, there was no market at all for that film in the US. Television stations would not air it, and it was originally shown between double features in movie theaters in Europe. The film was not seen in the US until the creation of MTV.[2]

James was contacted by Beatle George Harrison, who was working with a group called Grapefruit at the time. Harrison and the group had written some songs they wanted James to consider recording. Since the group came to a decision to change their musical style (and would do so with "Crimson and Clover": see below) and the material Harrison and Grapefruit provided was in the style of "Mony Mony", James turned down their offer.

The music business changed after the success of "Mony Mony". Top 40 program formatting, based on 45 RPM single records, drove popular music on the radio. Few stations played cuts from record albums, so radio was, in effect, "selling" single records for the record companies.[3] In August 1968, James and the Shondells went on the campaign trail for three months with presidential candidate, Vice-President Hubert Humphrey. Meanwhile, popular music had become album-driven, displacing many performers whose singles had been top sellers. James realized he and the Shondells needed to become an album-oriented group if they were to survive in the business, necessitating a change in their style.

After working out a marketing strategy for their new sound, James visited WLS when the group was in Chicago to play a concert, bringing along a rough cut of "Crimson and Clover" to the station. WLS secretly recorded the music when James played his tape for them. By the time James was out of the building and in the car, its radio was playing the station's dub of the not-yet-finished song. "Crimson and Clover" had to be pressed the way it was heard on the radio station, and the marketing plan was now wasted time and effort.[3]

"Crimson and Clover" was a huge success, and the group would have two follow-up hits that also reached the Hot 100's top 10, "Sweet Cherry Wine" and "Crystal Blue Persuasion". James, who co-wrote all three of those songs,[8] and his band did well enough with the transition to be invited to perform at Woodstock. James describes Artie Kornfeld's invitation like this: "Artie was up and asked if you could play at this pig farm up in upstate New York." I said, "What?!?" "Well, they say it's gonna be a lot of people there, and it's gonna be a really important show." At the time James was in Hawaii and was incredulous about being asked to travel 6,000 miles to play a show on an upstate New York pig farm, telling the Roulette Records secretary, "If I'm not there, start without us, will you please?"[1][3]

In March 1970, after four more hits, drugs almost killed James when, at a concert, he collapsed, and was pronounced dead. However, he survived, decided to take a break from the recording studio, and moved up into the country to recuperate. The Shondells, without James, recorded two albums under the new group name Hog Heaven (one "self titled" on Roulette Records in 1970 and the 2nd (1971) unreleased until 2008), but disbanded soon afterwards.

Tommy James and The Shondells were voted into the Michigan Rock and Roll Legends online Hall of Fame in 2006. Four of the band's biggest hits have been voted Legendary Michigan Songs: "Crimson & Clover" in 2010, and "Hanky Panky", "I Think We're Alone Now", and "Mony Mony" in 2011.[9]

James went solo and had two further Billboard Hot 100 top 20 chart hits with "Draggin' the Line" (co-written by Bob King) (#4 in 1971) and "Three Times in Love" (#19 in 1980), plus eleven much smaller Hot 100 chartings. "Hanky Panky" has been James' one RIAA certified gold single. He also wrote and produced the million-selling 1970 hit "Tighter, Tighter" for the group Alive 'N Kickin' (co-written by Bob King). In 1971 James spent time in Nashville at the recommendation of friends when a "mob war" erupted among organized crime families in New York, and threats against James were intimated due to his connection to Morris Levy. He recorded an album there with top Nashville musicians, My Head, My Bed and My Red Guitar, which received critical acclaim but sold poorly. He left Roulette Records in 1974 and two more albums, In Touch (1976) and Midnight Rider (1977), followed on Fantasy Records, with yet another, Three Times in Love, appearing on Millennium Records in late 1979. The independent label Aegis Records put out his Hi-Fi in 1990.

To date, over 300 musicians have recorded versions of James' music.[1][2] In the mid 1980s, three covers of James' songs were in the top ten on Billboard's Hot 100 (the last two simultaneously): Joan Jett with "Crimson and Clover", Billy Idol with "Mony Mony", and Tiffany with "I Think We're Alone Now".

In October 2008 James and the three surviving members of the original Shondells (Pete Lucia died in 1987) reunited in a New Jersey studio to record again, after 37 years. The group recorded an album, I Love Christmas.[2][10]

Music and the mob

In February 2010, an autobiography Me, The Mob, and The Music was published. James announced that deals were in hand to turn the story into both a film and a Broadway play.[2]Barbara De Fina is producing the film.

It was evident when James first met Morris Levy, the head of Roulette Records, that Levy was willing to strongarm others when necessary. Those signed to Roulette were there to produce money for the company, having their needs met only when it pleased Levy. Asking to be paid meant intimidation; to survive, those under contract to Roulette needed to find a means of generating income that did not involve the record company, such as personally booked tours.[4] While a Roulette artist had great creative control when recording for the company, the lack of payment for those efforts was difficult to take.[3][4][10]

James estimates the company owed him royalties he never received.[4][11] Roulette was a front for organized crime, also functioning as a money laundering operation. In the early 1970s, Levy was at the wrong end of a mob war[clarification needed]. James had to leave New York for a while to avoid a mob hit, which explained[how?] why he recorded an album in Nashville in 1971. He did not feel comfortable writing his book until all those deeply involved with the record company had died.[4] It was only after Roulette Records and Levy's Big Seven Music publishing company were sold (the record company to an EMI and Rhino Records partnership, the music publishing company to Windswept Pacific Music which was later sold to EMI) that James began to receive large royalty checks from sales of his records.[12]

James can also be seen on late-night informercials selling collections of music from the Woodstock era for Time Life.[14]