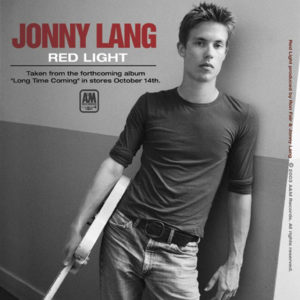 Jon Gordon Langseth Jr. (born January 29, 1981), known as Jonny Lang, is an American blues, gospel, and rock singer, songwriter, and guitarist.[1] He has made five albums that have charted on the top 50 of the Billboard 200 chart and has won a Grammy Award for Turn Around.[2]

Jonny Lang was born in Fargo, North Dakota, United States, of Norwegian descent.[1] He started playing the guitar for his friends at age 12. He played modern hits to the classics, even performing a rendition of Jimi Hendrix's take on the National Anthem. Soon after his father took him to see the Bad Medicine Blues Band, one of the few blues bands in Fargo, Lang started taking guitar lessons from Ted Larsen, the band's guitar player. Several months after Lang began, he joined the band, which was then renamed Kid Jonny Lang & The Big Bang. Two years later A&M Records, then home of Janet Jackson and Soundgarden, was invited to come see him at a live performance at Bunkers Bar in Minneapolis, and he was signed to the label becoming the latest in a trend of young blues guitarists that then included Kenny Wayne Shepherd and Derek Trucks.[1] The band moved to Minneapolis, Minnesota, and independently released the album Smokin' when Lang was 14. He was signed to A&M Records in 1996.[1] He released Lie to Me on January 28, 1997.[1] The next album, Wander this World, was released on October 20, 1998, and earned a Grammy nomination. This was followed by the more soulful Long Time Coming on October 14, 2003. Lang also made a cover of Edgar Winter's "Dying to Live". Lang's 2006 album, the gospel-influenced Turn Around, won him his first Grammy Award.[3]

In his earliest performing years, Lang always performed barefoot on stage, because "it feels good" and once in tribute to Luther Allison, a friend who had recently died. He has since given up that practice, after several near-accidents and electric shocks.[citation needed]

In more than 10 years on the road, Lang has toured with the Rolling Stones, Buddy Guy, Aerosmith, B.B. King, Blues Traveler, Jeff Beck and Sting. In 1999, he was invited to play for a White House audience that included President and Mrs. Clinton.[4] Earlier that year he was selected by the newly elected Minnesota Governor Jesse Ventura to perform at his Inaugural Ball. Lang also makes a cameo appearance in the film Blues Brothers 2000 as a janitor. In 2004, Eric Clapton asked Lang to play at the Crossroads Guitar Festival to raise money for the Crossroads Centre Antigua.

Lang also appears regularly as a part of the Experience Hendrix Tour along with many other well-known guitarists to pay tribute to the deceased guitar legend.[citation needed]

Jonny Lang, since the beginning with The Big Bang, has used a 1972 Fender Telecaster Thinline made by the Fender Custom Shop, as well as a 1958 reissue custom shop Gibson Les Paul in more recent years as his sound and style have grown and flourished. His original Custom Shop Tele - with a black flamed maple top, flamed maple neck, pearl signature inlay and his trademark pinup girl character on the aft body was stolen some years ago. He has added a couple more custom thin line teles-all carrying the basic aesthetic motif, but with varying colors from a burnt orange/amber to a deep violet throughout the years since. The 1972 Fender Telecaster Thin line is a semi-hollow spruce body, maple top, and a maple neck and fretboard. He has not, however, sported the pearl "Jonny Lang" signature inlay since his original custom tele, but still stays true to his WWII-style pinup girl at body artwork. Jonny's Telecasters have three Bill Lawrence Pickups (500L Neck, 500XL Bridge) with a 5-way pickup switch and a coil-tap for accessing a single-coil tone. On his pedalboard for his 2014 tour were the Analog Man King of Tone, a Whirlwind The Bomb boost, a Visual Sound V2 Route 808, a Full tone Ultimate Octave, a JAM Pedals Tube Dreamer, and a Boss AW-3 Dynamic Wah. On this tour he played his Custom Shop Tele and the 1958 reissue Custom Shop Gibson Les Paul through a pair of modified Fender ’65 Deluxe Reverb amps.[5] Jonny also used an arbiter Fuzz Face and an Electro Harmonix POG for The Experience Hendrix tour. Lang has also used Audio tech Guitar Products ABC Selector CCM on his 2005 acoustic tour.[citation needed]

The Fender Telecaster featured on the cover of Lie to Me is in fact not a Telecaster at all, but an original Fender Esquire. Upon filming the music video for the title track "Lie to Me" which took place in a San Francisco music store, the owner of the store suggested Lang play the Esquire in the video. Lang fell in love with the guitar and it was purchased and given to him as a gift. He continues to use it, but not as often as his Custom Shop Telecaster and Signature Series Les Paul.[5]

From 1993 to 1996, Lang's backing band was the Big Bang. This group consisted of three founding members of the Bad Medicine Blues Band: Ted "Lightnin' Boy" Larsen on guitar, his brother Michael Rey Larsen on drums, and Jeff Hayenga on bass. Keyboardist Bruce McCabe joined The Big Bang in 1995 after Lang and this young band from Fargo impressed him with their set opening for McCabe's band at the time, The Hoopsnakes.[citation needed]

From 1996 to 2004, Lang's backing band included Paul Diethelm on guitar, Bruce McCabe on keyboards, Doug Nelson on bass and Billy Thommes on drums. Also appearing on keyboards during 2003 and 2004 was Donnie La Marca, filling in for McCabe during his break from touring. Nelson was killed in a traffic accident in 2000 and was replaced by Billy Franze. Franze was in turn replaced by Jim Anton in 2003. Saxophone player David Eiland was added in 2000, providing Lang with a foil for extended instrumental jams. In 2005, Lang replaced the entire lineup, except for Anton, and embarked on an acoustic tour. He performed with Wendy Alane Wright at the 2000 pre-Grammy party. Guitarist Reeve Carney was the band's opening act for several shows in 2005, as well as for the 2006 and 2007 tours.[citation needed]

On September 17, 2013, Lang released his first studio album in seven years, Fight for My Soul.

On January 12, 2021, it was announced that all confirmed concert dates are cancelled until further notice, because of a medical issue that affects Lang's singing.[8]

Lang has two older sisters, Stephanie and Heidi Jo. He also has one younger sister, Jessica ("Jesse"), who was a contestant on season 8 of American Idol.

Lang became a Christian in 2000.[10][11] In an interview with Sara Groves in Christianity Today, Lang gave details about his conversion, assuring her that he had had a supernatural experience with the Holy Ghost.[11] In his own words, he has said that he formerly "hated Christianity"[12] and "despised the things of God", but now he wants to share with others about Jesus' love.[13]

The songs "Only a Man" and "Thankful" from his album Turn Around, are about his belief in God. He has also co-written a couple of songs with contemporary Christian music artist Steven Curtis Chapman, notably "My Love Remains".[14]